I was about seven years old when it happened. Sitting in the living room, as I liked to after dinner, I gazed out the bay window at the stars in the sky. There was a big etched vase with decorative feathers sweeping out of it. I’d often get lost in my thoughts as my eyes traced the swirls of its surface. My father had come home late from work and was, as usual, upset with the state of the place. No one had done their chores, he told my mother—except for me, “the Korean little shit.”

A few years ago, I shared a version of this story in a local zine. I was encouraged to surround it with more forgiveness, which I did. Most of my life, I’ve tried to cater my words and my existence to an audience that begged me to temper the truth. My truth wasn’t palatable. It was so unpalatable that I completely erased large blocks to protect myself from it.

When I heard my father shout those words that night, I twisted my juvenile brain until he was the one deserving sympathy. He was overworked and he was right—no one else did their chores. My anger diverted to his biological kids. If they had just done their jobs, this wouldn’t have happened.

After an audible gasp, I heard him say, “Well, that’s what she is? Isn’t she?”

My oldest sister rushed in, assuring me that he didn’t mean it, but I knew he did. No matter what I did right, I would always be Korean. The ‘little shit’ part didn’t bother me so much. As I blamed my adoptive siblings for being lazy, I blamed myself for being Korean.

My father never came to apologize. He isn’t capable of such things. Days and then years swelled into decades as if nothing had happened. I’d be surprised if he remembers that night.

Adoptive children can do this thing where we cling to the fantasy. When we’re told from all angles how thankful we should be for our saintly parents, we want to believe it. Sometimes we let that desire expand until it suffocates what we know. 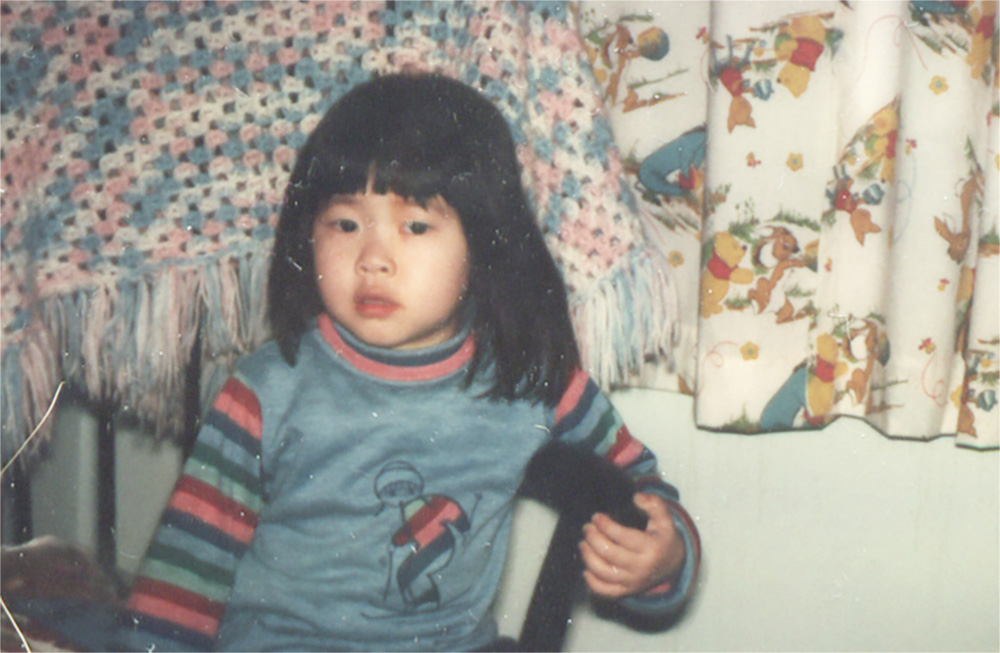 Adults can do this thing where we cling to an illusion of who we think we are and want others to be. It can lock us out of the closet that we shoved all the things we didn’t want to look at. I clung onto memories of him buying me gum, cheering as I rode my bike with the training wheels off, and taking me to pick out my first synthesizer. I let those images save me—save us both.

My adoptive father’s history was shrouded in secrecy. I’m no longer sure which details are real and which were fabrications. He never went to college. His father died young, leaving the business to him. I was told his mother was a malicious liar and shopaholic who competed for his attention, pitting people against one another. She lived and died downstairs in our house. I was told his sister was an alcoholic who later embezzled away our savings—which I don’t think is true anymore. Most likely, my adoptive mother overspent, kept poor records, and scapegoated his family.

To be honest, I still feel sorry for him. Instead of dealing with his issues, he married a woman who resembled his mother. He gave her the reigns and let her make a mess of his life. She still limits his knowledge and communications. But he’s an adult who was never strong enough to protect me from her or himself.

I forgive my adoptive father for being a man of his time, when therapy wasn’t as acceptable; for wanting to trust in his wife; for giving her everything he could because that’s what he thought love was; for not being sharp enough to keep track of his own finances; for giving his biological kids things he couldn’t afford to give me; for being a clumsy communicator; for abandoning me without question because he knew it was either me or her, and I promised nothing.

I don’t forgive him for modeling male toxicity and emotional neglect, which I’d later accept from future partners; for making me feel uncomfortable in my own skin; for amplifying my self-hate and shame; for objectifying my race; for eliminating and obliterating boundaries; for taking his anger and pain out on us, and then playing the victim.

My adoptive father undoubtedly gave me a lot. No one is 100% bad. But he was never able to love me as I deserved to be loved. Because to love me, he’d have to really see me, and I was never real to him. I was proof of his charitable goodness. And that’s the danger of adoption. In the conscience of too many adopters, that one single act overrides all the rest.

Today, I embrace being Korean American and all that I know to be true. I’m not thankful for all that I’ve learned, but I accept it. Reality can be a daily challenge but denial is putting my pain in a bank that pays out dividends to the ones who’ve caused it. Living and speaking my truth allows me to be the beneficiary for once.